There is Power in the Bush 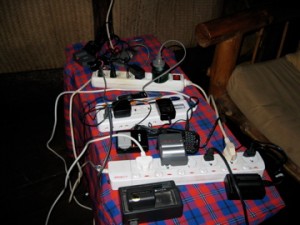 In this era of cell phones, digital cameras, laptops, netbooks, notepads and all other things electronic one of the questions I get asked a lot is – Is there power in the bush? I could answer that in a philosophical manner about the power of being out in the middle of nowhere being a part of the circle of life but I know that is not what is meant.  People want to know if and where can they plug in.

The answer to the first question is of course!  But where does the power come from in the middle of the bush?  Is it generated by trained monkeys pedaling bikes hooked up to a generator?  Cheetahs running on a treadmill?

Nope, but there is power.  At night most of the camps and lodges run a generator for power for several hours.  And as our hosts are always accommodating they set up a charging station usually in the dining hall (see attached photo and you will know why most people want to get to the charging area early).

But we have in most of our vehicles electric inverters that take the 12volt DC power from the car and convert it into 110 electricity that we are used to plugging into.  Thus while you are going Ooh and Ahh at that Mother elephant and baby your cell phone or for those on the cutting edge your IPad are charging.

I have also recently obtained a solar charger and am working on using that too.  I will give you a report soon on how that system is working.

No matter what – you will never be powerless in the bush.