Several weeks ago I received notice that Infinite Safari Adventures had won the 2013 Product Development Award from the Tanzanian Tourist Board. This past week I was invited to the Tanzania Embassy in Washington DC to receive my award. 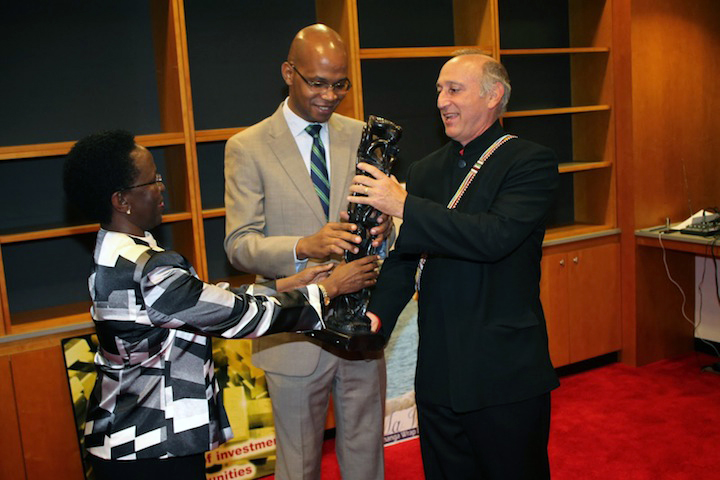 It was a great day. I arrived at the Tanzanian Embassy wearing my Maasai beaded sash given to me by my friend Patrick. At the ceremony I was awarded a beautifully carved sculpture. It was presented to me by her Excellency Ambassador Liberata Mulamula the Tanzanian Ambassador to the United States (also known as Madam Momentum – and if you met her you would understand why) and by January Makamba the Deputy Minister of Communications, Science and Technology. Minister Makamba is brilliant, poised and has all the talent, if he wants, to eventually become President of Tanzania. I also had the honor of meeting Allan Kijazi, the director of the Tanzanian National Parks.

I was then given a further honor. It is tradition in Tanzania that the end of an event of this type to give a “vote of thanks” which is a short speech thanking the hosts. I was asked to give the note of thanks. I told the Ambassador and Minister about my love of Tanzania, how I first went to Tanzania in 2000 and fell in love with the country and its people the first day. I also told them how much I loved introducing people to Tanzania. My note of thanks was well received.

After Tanzania sponsored an event at National Geographic with NatGeo’s Andrew Evans giving a presentation on Tanzania’s National Park. I loved re-visiting many of the places I had been. And I met some great people who were interested in going on safari!

All in all it was a very special day for Infinite Safari Adventures!