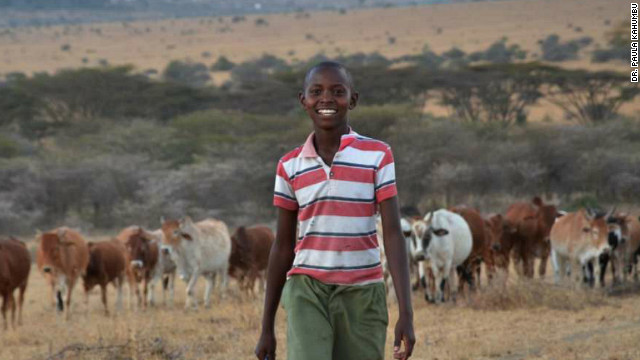 From my safari travels, my friendship with my Patrick, my Maasai Rafiki (friend) and other African experiences I have come to learn how clever and bright the people of Africa are and how they can come up with solutions to problems with a minimal amount of stuff.

I was reminded of this again recently when I saw a CNN online article about a young man from Kenya named Richard Turere.  Now 13, he began at age 9 he filling his traditional role of watching over his family’s flock of cattle.  He grew up hating lions because they would raid his flock and kill cattle.  This problem is one of the major factors in the diminishing lion population.  By keeping them away from humans it can help the survival of these magnificent animals.

As Richard tells his story, one day he observed that lions were scared of moving lights.  Lions stayed away from the cattle when someone was walking around with a flashlight. But how do you stay up all night shining a flashlight without falling asleep?  That is when necessity became the mother of invention.  Richard devised a series of flashing LED lights around the family stockade.  He wired the lights to a box with switches and hooked the whole thing up to an old car battery.  The LED lights flicker on and off intermittently.  It has worked.  Since coming up with this brilliant idea his family has not lost any livestock to predators. He did this all by himself without any training or advice.

Because of his ingenuity, Richard has been invited to the TED 2013 conference here in California.

What is equally important about this clever idea is that protects lions from being slaughtered by nearby Maasai who have times slaughtered entire prides of lions to protect their cattle.  By saving lions, it fosters tourism and encourages people to come to Africa on Safari.

Congratulations Richard.  I am sure your village and the elders are very proud of you, as they should be!