You Meet The Best People When You Go On Adventures

My son Darrow right now is finishing up a two-month trip traveling through Argentina and Chile going where the road takes him (I am proud and envious).  He has had wonderful adventures and met amazing people along the way.  I like to think that my enthusiasm for traveling and adventure somehow how influenced both he and his sister Sasha both of whom have been to more places in the world than I did when I was their age. (I am a proud parent!) 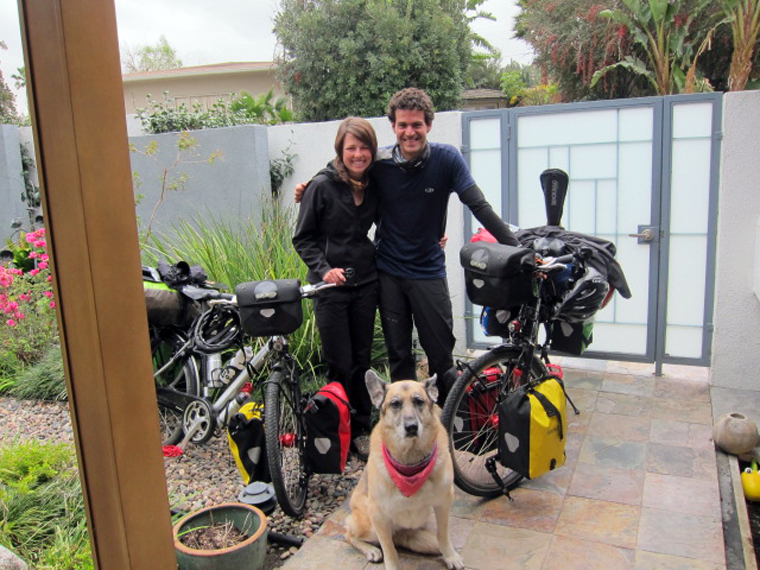 Amanda and Antonio with Heidi

The thing we have all learned from our travels is that the best thing is the people you meet.   And you never know when they might show up at your door.  About two years ago while in Hawaii I decided to do something I have never done – go on a night dive with Manta Rays.  It was an incredible experience having these graceful creatures swimming around inches from your head in pitch black ocean waters having them only illuminated by well placed lights.

Flash forward to a couple of weeks ago when out of the blue I got an email from Antonio saying hi and saying that he and Amanda were biking in California and wanted to drop by and say hi.  Of course!  Then another email arrived – could they pitch a tent at my house. I said no.  Pitch a tent?  No you will stay in our home I told them.

What I did not know at the time is that Antonio and Amanda are biking from Amanda’s house in California to Antonio’s home in Spain!  It is a 4-year journey taking them down the coast of California through Mexico and Central America to the tip of South Africa. Then it is across the ocean to Africa where they will bike from Southern to Northern Africa and then across to Europe to Antonio’s home to be back in time so Antonio can coach swimmers for the 2016 Olympics. They are also raising money to support HIV charities.  You can read more about their trip here.

Showing up at our door with fully packed bikes (including an inflatable raft and paddles) we had a great time hearing about their adventure so far and their plans for this great adventure.

I know they are going to be meeting some incredible people along the way and having many adventures.  I wish them luck and support them fully.  And Antonio don’t be surprised that when you return to New Zealand I show up at your door ready to go on an adventure with you!