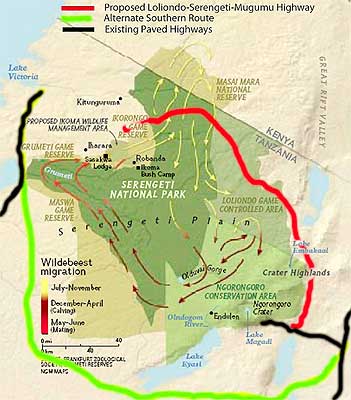 Ever since the 70s there has been discussions of constructing a Trans-Serengeti Highway. Until recently this absurd proposal was dead. It has now been revived and is at a critical juncture as National elections in Tanzania loom and political parties try for leverage and recognition on the world stage.

Such an endeavor would be an ecological disaster. It would interrupt migration patterns, endangering human lives and spoiling the beauty of the vast plains. It is wrong on so many accounts and it saddens me to even think of it being proposed. This ill-conceived project changes all the rules, and would destroy the integrity of a priceless world heritage that has been protected by the people of Tanzania since the birth of their country.

The planned highway (in red on the map) will cut across a pristine and remote wilderness area of the Serengeti. Yet the choice need not be about deciding between people and nature. A safer alternative route to the south can bypass Serengeti altogether and provide more economic benefit for the people of Tanzania! It would connect with paved highways to western, central, and eastern regions of the country, serving several times the number of people.

Education and petitioning of the Tanzanian government is essential and now is the time. Many Conservation organizations, those of us in travel industry, and individuals are doing what we can to prevent this travesty. You can read more  here  http://www.savetheserengeti.org/issues/highway/stop-the-serengeti-highway/#ixzz14GbNRMyA