After finally getting some rest and attending a conference with Namibian Tour Operators it was now time to go see what Namibia looked like (or at least part of it). Namibia is vast (bigger than England and France combined) but only has 2.4 million people in it. Our area of exploration was the northwest coast, part of which is known as the Skeleton Coast. The coast is named for the bleached whale and seal bones on the shore during the years when the whaling industry flourished here. Other “skeletons were those of the many shipwrecks on the rocky shore over the years, and we saw one during our trip. 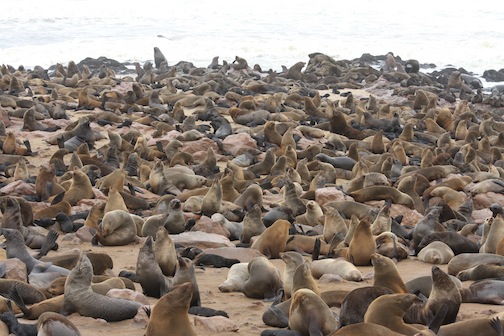 One of our first stops was the Cape Cross Seal Colony. This area is home to one of the largest colonies of Cape Fur Seals in the world (one way to identify them is by their external ears). When we stopped all we could see were seals, seals and more seals! It was an amazing sight. We were lucky to have arrived at the heart of birthing season. Moms with their babies, Big bulls fighting for territory, with moms grabbing their pups with their mouths to move them out of the way so they would not be trampled. It was a noisy, smelly scene.

It was also cool to stand in such a historic place. In 1486, the celebrated Portuguese seafarer and explorer, Diego Câo, landed there and erected a stone pillar topped by a cross, establishing his country’s claim to the territory. It is always a special feeling to stand in a place and imagine what it must have been like before roads, cell phones, and cars to land at this barren spot at what must have seemed like the end of the world.