Living in East Africa and being a sea kayaker offers the chance to go exploring new waters quite often.  In fact when Alan Feldstein came here in 2008 with his kids we were the first to paddle down a mangrove river and out to Maziwi Island.  Later when we were together in February after the launch of Infinite Kayak Adventures we paddled Manza bay and explored areas that had never been explored before. 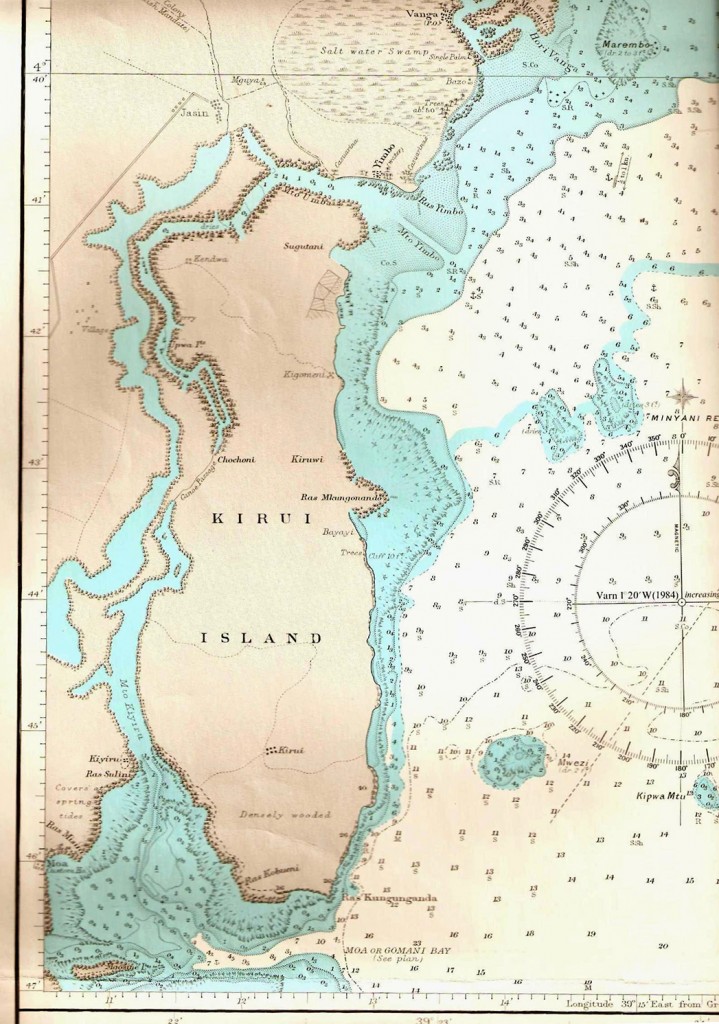 However, I was especially pleased when a late 11.00am start and low expectations developed into one of those epic days to treasure.  Much of the East African coast hasn’t been properly surveyed since before the War – which war depends on which section of coast.  Alan and I had explored some ruins from WWII but the section I was on today – the Napoloenic War was the relevant milestone.

I thought I’d explore the bay and have a look at a channel that was shown on no maps except my German 1870’s chart, where it was denoted as “canoe passage.”  Fully expecting it to have silted up 100 years ago, I was able to keep pushing through the mangrove estuary into ever narrowing channels.  There was no sound of life except things plopping into the ooze and the only movement was the current of the rapidly ebbing tide.  In the end the channel was the size of a stream and getting smaller.

I had to get out of my kayak once and I was about to turn back when I sensed the tide going the other way. I realized I must have got past the highest point so persevered as “canoe passage” widened once more into a channel worthy of the noblest of tall ships.   Well the tide was with me but the strong winds that picked up funneling into my face had enough power to stop a  60 gun Ship.  It took another 3 hours to make the open ocean again and discover I am now in Kenya, not Tanzania, (somewhere in the channel I had missed all the duty free shops).  I had discovered that what had once been Kirui Island on the old charts and is just a peninsula on modern maps, is still an island.

Tanzanian law is quite strict with rules about cutting down and developing mangrove areas and this might well be what stops things silting up here and preserves tracts of (nearly) impenetrable mangrove swamp – possibly one of the last preserves of the African dugong (called a manatee in North America).

Anyway, after a full days paddling and 40 kilometers under my spray deck – it would be an easy couple of hours paddling home in the dark.  Or in reality an 4 hour battle once the wind turned to face me once again- nothing about that on the charts! Still I did not care – a days paddling like that was worth every “day after” ache.