Hollywood comes to Tanzania? Yes! Because of his expertise and reputation, my partner Steve is called upon to lend technical support to those who film in Tanzania. 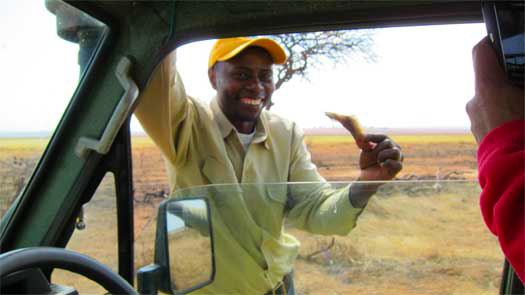 Julius Holding a Small Piece of a Gazelle Bone

Last year the History Channel presented a multi-part series called Expedition Africa: Stanley & Livingstone. An eight episode series, it follows four adventurous explorers to try and recreate the path Stanley may have followed to find Livingstone 130 years ago. The story of the exploration told by Stanley coined the memorable line “Dr. Livingstone, I presume.”

Steve arranged all of the boats and other logistics for the show. And if you don’t think this is a small world where we are all connected – one of the 4 adventurers was Pasquale Scaturo who is a fellow member with me in the Los Angeles Adventurers Club.

And their Tanzania guide? None other than our go-to guide Julius! That is him holding a small piece of a gazelle bone from a leopard kill we had seen the day before.