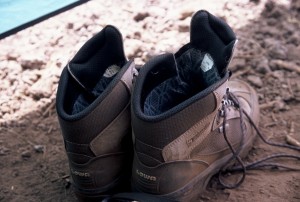 A recent article in the Los Angeles Times described a young man, Fredos Okumu, from a remote part of Kenya, who as a young boy, expected to come down with malaria at least twice a year.  To try to prevent mosquitos from biting he would sit in his house surrounded by smoke – eyes stinging, nose running, and clothes and hair smelling like a campfire. Later he grew up and became an entomologist.  While doing research his mentor discovered something quite unique – mosquitos are attracted to smelly socks!  He discovered this by standing naked in a room of mosquitos (no thank you) to see where he was bitten and found that they were attracted to foot odor.

With this knowledge Fredos Okumu became driven to find a cheap practical way to use this knowledge.  He has developed a plan is to enlist villagers to wear cotton pads in their socks to be used as bait in mosquito traps.  This would be a cheap option to chemicals and healthier than sitting in a room full of smoke. He is now working on a “smarter mouse trap” by building  a wooden box with louver vents and a battery-run fan to blow the sock odor into the air through a bamboo pipe to attract mosquitoes to the trap.

So when you are sitting around your fire after a day of wildlife viewing and it is that time that mosquitos are active, make sure you are wearing clean socks!